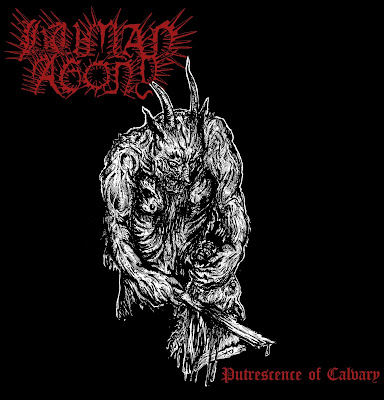 Since forming in 2016, HUMAN AGONY have cast an outsized shadow. Having released just a handful of demos and splits, HUMAN AGONY's catalog is sparse but strong, corroborated by the band's devastating live performances on recent tours. With this debut full-length, Putrescence of Calvary, HUMAN AGONY display the full might of their weaponry.

Comparisons to Conqueror, Revenge, and Black Witchery are inevitable, and indeed, HUMAN AGONY are among the few elite bands deserving of such comparisons. That the band hails from Victoria, B.C.—known for the infamous Ross Bay Cemetery and a longstanding history of Satanic and occult activity—naturally also draws attention to the profound influence of Blasphemy. But HUMAN AGONY offer more than rote regurgitation of the bestial black/death and war metal tropes.

Whereas many, if not most, bands that attempt to play this subgenre tend to be style over substance, HUMAN AGONY demonstrate an intense dedication to writing songs that are complex and captivating. While the musicianship on these tracks is undeniably impressive, it is the strength of the songwriting that truly set HUMAN AGONY apart. Each track contains a procession of riffs, precisely pieced together, with the collection of songs strategically sequenced to highlight the compositional arc of the album as a whole.

Significantly, the production showcases the instrumentation while maintaining the natural cacophony the band cultivates. The guitars stand out just enough to give voice to the riffs, as the frenzied, violent pulse of the drums bludgeons the listener. The unhinged solos and precise cutaways add a degree of unpredictability to the songs, while the wretched vocals lend a feral element to the recording. Interspersed among the tracks are occasional unsettling interludes and extraneous noise to disorient the listener before being propelled back into the fray. Bookending the album are an intro and outro performed by harsh noise musician Striations, who has toured with and collaborated with HUMAN AGONY in the past.

In every way, Putrescence of Calvary is the fulfillment of the promise of HUMAN AGONY's earlier work—the blood-drenched blossom of war’s carnage. Finally, the cover illustration by the skilled and highly regarded Finnish artist Heidi Kettunen, known for contributing cover art for Ride For Revenge, superbly complements HUMAN AGONY's music and provides a fitting aesthetic for this debut album.
at 2:25 PM